Leaving Sonoma County last Friday, we made several poor choices in roads and stops. The trip finally felt like it began after clearing the rise near Mt. Madonna on Hwy 152 and heading downhill into Watsonville with the ocean in view. Greenhouses both permanent and white-tarped arches over raspberries shone in the sun. This was veggie and fruit heaven for viewer and consumer. Farmworkers were hard at work in the fields, either tilled or in strawberries.

We went south on Hwy 1 to Jetty Rd just north of Moss Landing. The natural gas power plant dominates the landscape. This spit of land is across from a boat harbor where Elkhorn Slough opens to Monterrey Bay.

Besides boats in the harbor, there was a dock full of harbor seals, a flotilla of 30 otters and several kayakers. We walked to the jetty and around to a light-colored sand beach. The dunes separating bay from harbor are closed both for restoration and for the nesting Snowy Plover. But the beach is wide and if it wasn’t so soft, we could have walked for miles. 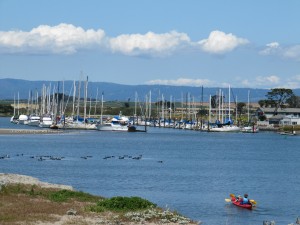 We walked for part of a mile and sat down to admire the rows of white waves, blue-green water and clean beach. Sandpipers skittered along feeding where a wave retreated. The ocean smelled grand. On our way back to the car, we caught sight of a Snowy Plover who had come down to the water. Mike couldn’t get a picture before it retreated. Perhaps spying this rare bird is like trying to get a snapshot of Bigfoot.

We made a quick tour of Moss Landing. The town includes several shops and restaurants, an RV park and marinas. Monterey Bay Aquarium Research Institute (MBARI) is here and has two research boats in the harbor.

At the south end of town is access to the Salinas River State Beach. Having enough of soft sand we walked on a hard sandy path near the salt marsh east of the dunes. We saw horse tracks but no horses, a couple of bunnies and squirrels.

We checked in at the Captain’s Inn and had an excellent meal nearby at Haute Enchilada. (Sand dabs with the freshest salad, crab enchiladas, ginger pudding. Fantastic.) We tried to walk off our excess eating and spotted four relaxed otters floating in the boat harbor. The sky revealed the thin smile of moon and a pale Venus.

Saturday we awoke to sunshine, barking sea lions and a view of bird-filled mudflats. Great breakfast with sweet potato pancakes.

Our walk today was at Elkhorn Slough Reserve east of town. We passed lots of strawberry fields before entering oak woodland. At the top of the hills where the visitor center is, we could look back on the slough and the bay.

There are several trail loops through the area. Only the first short part is paved, the others are wide graveled paths. The visitor center has displays including wonderful recently cut plants with identifications. It costs $2.50 per person and a dunk in Lysol to clean your shoes of any possible Sudden Oak Death contaminants to access the Reserve.

The area is overseen by the CA State Fish & Game and NOAA (National Oceanic and Atmospheric Administration). The Ohlone, and then the Mexicans once ruled this area. In the mid 20th century this was a dairy farm and some of the buildings remain.

Elkhorn Slough was the state’s third largest estuary. Due to various changes from land use, the Corps of Army Engineers cutting straight through from slough to bay and from dike removal it is now a tidal exchange. This means the slough has lost mudflats and can no longer provide a flyway stop full of food for migratory birds.

The mouth of the slough opens in line with the Monterrey Bay Canyon, a geological formation larger than the Grand Canyon. This deep space is why the Bay is a center for marine research.

Meanwhile back to walking…we decided to walk on a docent led tour. Linda helped us focus our binoculars (left eye-use center wheel, right eye-use eyepiece). A short way down the trail is an overlook with some native plants: yarrow, strawberry, sage, Maritime poppies and coyote bush. Most of the meadow lands are dominated with invasive mustard and wild radish.

Our docent explained much about the area, which I couldn’t keep up with, but I bought a book.

Going downhill was not so bad. (Later on the way back up after walking a couple of miles, in the sun and 70+ degrees, it wasn’t so easy. ) We spotted bunnies some of whom were bound to be lunch for what we were soon to see.

At one of the barns was baby Great Horned Owl. It was poised perfectly in the nesting box opening.

When we got down to the water, willets and godwits were working over the sand. A passenger train went by. The railroad tracks mark the boundary of the Reserve. This also marks a 6’ ground level change from the Reserve to other parts of the land and is one of the many restoration challenges to the area.

Accompanied by a Western Grebe, elegantly gliding in the pond, we crossed a causeway that would be flooded at high tide. Crabs, sharks and rays like the area.  A Red Tailed Hawk flew overhead. From below he is identifiable by his black shoulder.

We separated from the group to go to Hummingbird Island. We hadn’t been there before and my knees and brain were sore from moving so slowly. We had to contend with a confused Canada Goose couple trying to protect their babies.

Oaks, elm, redwood, and eucalyptus shade the island. This arch over a pond was decorated with oyster shells, left over from the Ohlone. It was probably built by summer visitors who came by train.

We sat on a bench overlooking the water to rest for a while. Four kayakers took on six cormorants. The birds flew off.

Back off the island we saw some small restoration projects with plantings and mowed invasive plants. We walked around the fingers of the pond and disturbed a possum, who was definitely not pretending to sleep. In sunny spots we saw lizards. In one shady area were dogwood and ferns. This cool area was soon forgotten as we slogged back up the hill to the gift shop.

Having a good sense for finding food and accepting recommendations we went to lunch at Moss Landing Café. Mike had an open crab and I devoured a fried oyster sandwich – to die for. But we continued on to Pacific Grove. There are paths along the bay to be explored another time.

We went to Pacific Grove Museum of Natural History for the 49th Annual Wildflower. This is put on with help from the Monterey Bay Chapter of the Native Plant Society. It is the largest in the Northern and Western Hemispheres featuring over 600 species and varieties of Central Coast wildflowers. For example there were 15 kinds of lotus. We clarified sea thrift from coastal buckwheat and probably confused others. We wandered around their outdoor native plant garden that is much improved from our visit last year.

We drove along the coast to Carmel, stopping to watch the waves and gawk at stunning houses. There is a gorgeous beach and boardwalks near Asilomar, but we were too beat to walk anymore. We found two weddings and many other people out walking and enjoying the unusually warm weather.

Sunday, we walked into downtown Moss Landing for a few pictures and then had breakfast and a long chat with another couple at the Inn.

Moss Landing Marine Lab: We climbed up the hill to their new building. (Old one leveled in ’89 earthquake.) Open house was being held. The view was a little better than at the Inn, sitting atop a restored dune planted with willow, yellow bush lupine, coyote bush, etc. We visited some of the labs and then heard more about environmental politics in Moss Landing than we cared to know. Well, it’s not easy. The advice here is to just start restoration and then finish it.

Driving Hwy 1 from Santa Cruz to San Francisco: Much of this part of Hwy 1 you can drive like hell, unlike in Sonoma County. UC Santa Cruz bicyclists and others almost have room to ride on the side of the road. We passed many gorgeous sandy beaches with blue green water and white waves.

I could go on more about the things to see and places to walk around the Monterrey Bay, but I’d need another trip. I can’t wait.