General Vallejo’s Petaluma Adobe was surrounded by a 66,000 acres rancho in the early 1800s. As a State Historic Park today, the grounds are small and a walk would mean a tour of the parking lot and the second story porch around the adobe.

Walking is not the main attraction at the Petaluma Adobe. Important is the representation of California life in the 1830s and 40s.

Across Adobe Creek, a paved path curved up to the building. Prickly Pear Cacti line the walk. Many cactus paddles were loaded with pears and some plants were taller than I am. I stopped often to enjoy the green meadows and blue sky. A near perfect day. 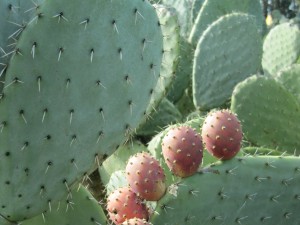 We walked through the museum display room and workrooms as they might have been when the ranch supported over 600 people. Today seemed very peaceful, though in past summers and falls this must have been hectic with the work of processing cattle, shearing sheep, turning wool into clothes and harvesting wheat.

We climbed the stairs. The charm and grace of such a building seeped into me. The second story porch was wide and completely surrounded the u-shaped building. Doors and windows were on the courtyard side. The outer wall on the north side curved like it was one giant handmade adobe brick, instead of composed of many.

It made me feel calm. I worked hard to imagine a large number of people living and working here. Perhaps this year’s Sheep Shearing day on April 9th and the Living History day on May 7th would help. There is also a Fandango in October.

Away from the road, it was not so hard to imagine what a beautiful spot this was. It’s still pretty good, but you have to work at ignoring the traffic noise and the power lines.

When I went back to the car, I studied the creek for a while. Fallen gigantic leaves from Big Leaf Maples decorated the clear water of the creek. Pussy willows were just starting to show. Casa Grande High School students have helped restore the creek. I wished for a creekside trail.

Oaks shaded the parking lot and a picnic grounds. We had lunch.

The entrance room to the adobe is full of displays describing life before and during General Vallejo’s time. The Spanish developed the missions and later Mexico offered land grants to people like Vallejo. In 1836, Vallejo was given 44k acres to reward him for his efforts in Sonoma. More acres were added later.

The building was originally a rectangular adobe with redwood. Half of it crumbled. The u-shaped remaining building is still mostly original adobe. Much of the redwood has been replaced and earthquake supports have been added. 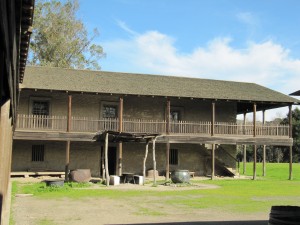 The work at the adobe and the ranch land supported over 600 people including native people. It was busiest during the mantanzas or the killing season from July to October. Cattle were processed for tallow and hides. Meat could only be used locally, as transport, was impossible. Sheep were raised for wool. Weaving was done in the adobe. Wheat was also grown.

The first story of the adobe was used for working rooms of the ranch. Upstairs were sleeping quarters for married couples and single workers. Rooms for the ranch manager and the Vallejo family when they were in residence were a little fancier. Natives stayed by the creek. 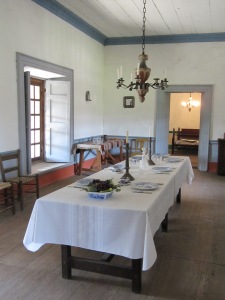 General Vallejo had the property until he sold it in 1857. The Native Sons of the Golden West bought it in 1910 and maintained it until the State took it over in 1951. It’s been a State Historic site since 1932 and a National Historic Landmark since 1970.

See you on the next trail!

Cost: $3/person also gets you into the buildings on the Sonoma Plaza. Since this is an historic park, it is on a per person rate not covered by the annual parking pass.

Other important stuff: Picnic grounds. Bathrooms (flush, cold water). Water fountain (sorta working). No bikes (there’s a rack). Dogs on a leash (not sure if they’re allowed in the building.)

Since it wasn’t much of a walk, we went to Crane Creek to walk some more and watch many groups of Frisbee golf enthusiasts. A warm January day.

One thought on “Petaluma Adobe is One Big Abode”