Just north of Sonoma Plaza, away from the bustle of shopping and dining tourists is a quiet park. A paved path for a 3-mile round trip walk goes through Depot Park. It also runs through history and behind modern backyards.

We picked up the trail by the museum (and gift shop) and headed east. For about a ½ mile the flat path is arrow straight through open meadows.

A short detour took us to General Vallejo’s house. Built in 1858 by a spring, many fruit trees were planted around this beautiful Victorian house. The brick warehouse nearby currently houses a museum and interpretive center.

Back on the main trail, the path goes between houses. This is a convenient bike path for the casual bicyclist, increasing safety, but with stops at each street. It’s a short stretch so walkers won’t be run over by the more intense rider who prefers the long ride. 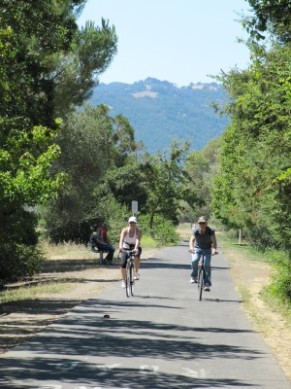 Just off the trail is Olsen Park, a small green spot in the neighborhood. One man was setting up a croquet course for adding entertainment to the park’s basketball court and playground. Picnic tables were laid out in party décor. There are benches in the park and also along the trail, if you need to stop, rest and pet a dog.

It’s another ½ mile to Hwy 12. Be careful crossing the busy road to Maxwell Farms Regional Park.

We walked back and then drove to this small regional park. Small but packed. It has several athletic fields, skatepark, tennis courts, playground and gigantic Boys and Girls Club building. 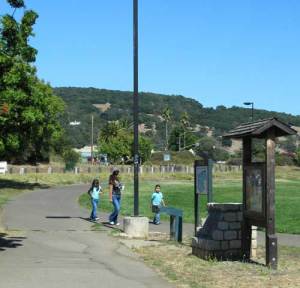 This is the first time I’ve walked most of this trail. Mike used to ride his bike on it when we lived in Sonoma. While a bit toasty on a summer afternoon, it’s a fine relief from the crowds on the Plaza.

Sonoma Overlook is north of Depot Park and the cemetery. See our visit there by clicking here.

Besides Vallejo’s house, several buildings on the Plaza are part of the Sonoma State Historical Park. For only $2 you can visit all of these historic buildings and Vallejo’s summer digs at the Petaluma Adobe. (Visit soon, since it is slated for closure.) Vallejo lived on and wrote extensively. He apparently knew everyone and how to get along with them.

Mission San Francisco Solano de Sonoma is off the northeast corner of the plaza and is the northernmost Californian mission.

In the northeast corner of the park in Sonoma Plaza, is a statue to the Bear Flag Republic. Taking Sonoma from Vallejo and the Mexican government for a couple of weeks in the summer of 1846, they raised the flag and then gave it up to the US Government.

Depot Park Museum is in the park north of Sonoma Plaza in the city’s Depot Park. This is the site of the former Northwestern Pacific Railroad depot and land. The park has picnic areas, playgrounds, ballparks and bocce courts. There are other playing fields along the trail.