It took us 2 days to walk Roseland Creek, not because it’s that long (3 mi roundtrip), but a hot day in August needed a cooler day in September to complete.

Near a relatively recent (10 years in old people time) housing development, there is access to a trail along Roseland Creek. Starting on a paved path next to townhomes, we headed west. Planted redwoods and coast live oaks lined the path. We passed a playground area with picnic tables and then single- family homes.

The path narrowed. The meadow was open and the light-industrial buildings continued on the other side of the creek along Northpoint Parkway. I was surprised how many flowers survived into August, mostly blue chicory and wild carrot.

Past the houses, the trail went from paved to gravel and dirt. The meadow was part of the Santa Rosa Naval Auxiliary Air Station and the creek was identified as a ditch on old maps I found online.

The airfield seems to have had an on again, off again use to the Navy, through the 1940s and 50s. The Santa Rosa Air Center was a civil airport until 1991. The airfield appeared in Die Hard 2 as Washington’s Dulles Airport.  Now Northpoint covers part of one runway and the Fresno St housing development some of another. 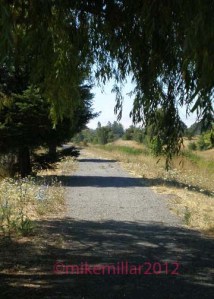 Since most creeks in the Santa Rosa plain are part of a flood control system, this trail makes a sharp left turn south  before a street and another development (or what was a runway). The path became a narrow dirt trail in one section and lumpy pavement in another.

I realized when I worked in the neighborhood that I used to park on Fresno St and watch the egrets in the creek while I ate my lunch. I also noticed the workers from nearby Amy’s Kitchen taking a walk. It’s a well used place and has it charms – just not the first place you think of when you want a nature walk.

Meanwhile, we continued  our walk. We took a few detours through the open area with now graffiti-covered concrete from the old airfield buildings.

In the other direction are wide-open spaces. I’m crazy to catch a vista in Santa Rosa plain. This one is just fine. On the way back we’d have a view of mountains to the north and east.

In September, we entered the trail at Yuba street, following the dirt path to Ludwig. A kingfisher flew over. Red-winged blackbirds sang in the rushes and a rooster returned their call from one of the homes nearby.

Being the dry season we were able to cross the creek and continued along Fresno St. Cork Oaks lined the street and sidewalk. We detoured through the neighborhood and looked out on the remaining open airfield. 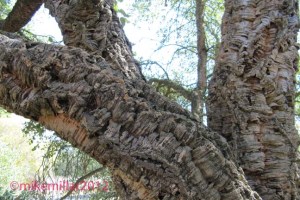 Mike remembered a spot where we could cross the creek again. This would not be possible in the rainy season. Maybe we’ll recall that the black oak marks the spot.

Thanks to Sonoma County signs that identify creeks and watersheds, we found another trail.

Directions: To access trail from Stony Pt, turn west on Pearblossom and then right Edgewater Dr. Please follow parking rules as most of spots are for residents only. Trail is on the behind the northernmost homes in this development.—Yuba Dr at the end provides some perilous parking with no shoulder spots along the road but it is another access point.—From the end of Fresno St is a trail that goes south for a short distance, main trail is on the other side of the creek.

4 thoughts on “A 2-day Walk on Roseland Creek?”