We hadn’t realized we needed vampire protection when we went to Forks on the Olympic Peninsula in Washington. We were just looking for a hotel that was pet-friendly.

Forks is now known as the author’s inspiration for the popular Twilight stories. We headed to the ocean to escape the threat.

Quinault Village is a small Native American town located at La Push on the Quillayute River at the Pacific Ocean. A small harbor of fishing boats huddled against the wind. Blowing sand made the beach treacherous. No walk here. 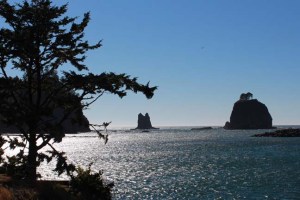 One of the beach features of Washington and Oregon we’d get used to – was the wood of giant trees, jumbled on the beach. And a new one, these smooth flat stones. Sometimes they lay thick and sometimes they look like the perfect backsplash with sand grout.

We backtracked and took a road on the other side of the Quillayute River. In the Olympic National Park, this road was lined with violent green grass, then ferns and then trees. Somehow it looked more ominous than anything else I’d seen. Until we reached Rialto Beach.

A path exists for short trek to the beach with a wheelchair turnaround. We weaved our way through the dead logs until we got to the flat stones of the beach. Wind roared; waves crashed; beach crunched and slid under my feet.

Always one to admire the power of the ocean, I was undone by the brightness of the dead trees looming against living green trees and the stark blue sky. A white gull flying overhead set the whole thing in motion for me. Wow, what a place. I tried to focus on the water. It was normal. Beach, trees and sky were not. I could come up with a scary story here.

We crossed back to Vampire territory, but spent a peaceful night in Forks. We headed south the next day for a long road day.

The Olympic National Park is celebrating its 75th birthday. Hardly a better place to celebrate than this temperate rainforest. The Hoh Rainforest gets 142 inches of rain a year. It was only partly cloudy the morning we visited. 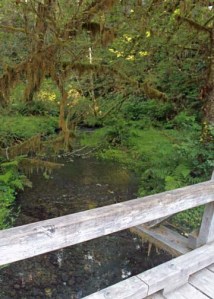 We enjoyed the drive to the entrance of the forest. It was early morning, but the place was full of hikers and others starting the day here. From the Visitor Center, we chose a short walk through the Hall of Mosses. Actually, we only did part of this. Click here for busy tourist trails.

But, I can identify the Sitka Spruce (gets to be 200’) and the red alder. The mixed forest also included Douglas Fir, ferns and of course, moss. 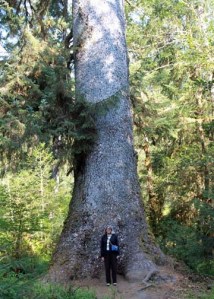 If you can make out this picture, you’ll imagine that luscious green algae swaying in the waters.

Other suggestions on the Olympic Peninsula

Sequim – we detoured to the John Wayne Marina of all places. We’d heard about a restaurant that is undoubtedly good, just too costly. We picnicked in the small park above the marina.

Dungeness National Wildlife Refuge – we found a short trail we could take the dog on, but the good stuff is through a gate not open to dogs. We’d wanted to wave back to Whidbey Island where we’d been watching the Strait of Juan de Fuca from another angle.

Lake Crescent – I don’t think I’ve seen such a beautiful place since I was a kid. I’m talking the Poconos, northern New York and New England. Just lake and trees and few people – it was gorgeous.

Lake Quinault – Another lovely lake for us real-lake starved Californians. We stopped at July Creek for a snack and a short walk. 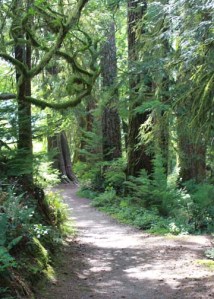 After this stop, it was a bit of a mad dash to get to Tillamook, Oregon by the evening.

2 thoughts on “Vampires, Ghostly Beaches and a Rainforest”