On the way home from Mendocino, it is almost required that we stop at Gualala Point or Salt Point. Since the dog was ‘on the ranch’ we decided to stop at Salt Point State Park.

The park does have a couple of miles of flat trail and some amazing rock formation. But this view isn’t bad for a picnic lunch. (You can get to this spot by taking the road after the campgrounds, drive past the a-frame Visitor Center on a gravel road and you come to a terrific picnic ground.) 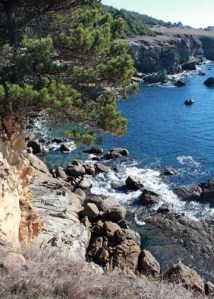 After lunch, we backtracked and went out to the end of the road and parked to the left – with another view south and overlooking the Gerstle Cove Marine Reserve, California’s first underwater park.

June 2014 Update: Access to Stump Beach and Fisk Mill are now open in the park. 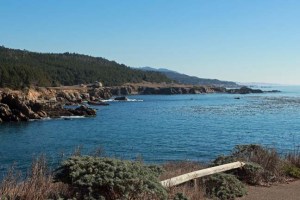 A small paved path curves around the first small point and then gives way to erosion. But the trodden path is visible. So are the rock formations with the equally amazing name, tafoni. The ocean waters carve some interesting lines and shapes in the sandstone. In places the rock looks like a Klimt painting of patterned shapes.

The other thing that sandstone does is make for crumbling and rutted paths. After the curve around this first little point, head left or north on a rutted road.

In places the rock has been pushed up or fallen away to great slanting slabs of rock. If you look carefully, you can see some harbor seals lying on the rocks across the first water. They kept wary eyes on us as we walked by.

This day we did not walk far, but we could see the next point of land to round. You can walk near the water north to the next cove or you can stay on the rutted road as a shortcut across the prairie. The trails curve around to Stump Cove. 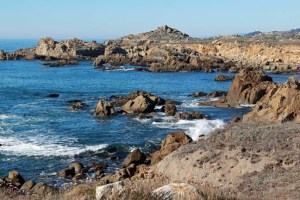 People come to play in many ways at Salt Point. I don’t think this creature was created by ocean and wind.

Several years ago, on the large outcrop, in the middle of the meadow, someone or periodic visitors created playful art. They (myself included) placed driftwood against the rocks as if holding them up of keeping them separated. This picture is from 2010 and the driftwood has since fallen away.

Good news for Salt Point State Park – aside from the fact that it was not closed in 2012 but services were cut – the bathrooms near the ocean are now open (for the last year and a half they were only open at the campground.) There is also some construction going on at the campground. Improvements no doubt – showers? – I don’t know.

Please visit Salt Point, it is wonderful. Due to the very dry winter, I can’t say what the wildflowers will be up to this year. Usually in spring and summer this park is carpeted with a variety of flowers. As the seasons move along the variety changes. These hardy varieties (sea thrift and ____?) made it to the fall of 2011.

More Salt Point trails: From the main parking lot you can hike to Stump Cove, to Fisk Mill and Horseshoe Cove (but those parking lots are not open.)

The uphill portion of the park is on the other side of Hwy 1. In geological terms the area is a series of uplifted plateaus. One place to hike is to the top plateau, where the pygmy trees grow.

Bathroom: At campgrounds, picnic grounds, and near the ocean.

Dogs: No dogs. – okay on paved roads and parking lots with leash.