Did I mention that I love Santa Barbara, because every place we wanted to go was about 10 minutes away?

One morning we headed to the Alice Keck Park Memorial Gardens. It’s only a few blocks from State St., the main shopping street in Santa Barbara.

Previously on the site was a grand hotel until the 1960s. Various proposals met with opposition or lack of fundraising. Finally, an anonymous donor gave the one-city-block-sized area to Santa Barbara, with the stipulation that it be a free park overseen by the Botanic Garden.

Two years after her death in 1977, it was revealed that Alice Keck Park (yes, it could be Alice Keck Park Park) had donated the land. The gardens were dedicated in 1980.

Not only is there a variety of plants and trees there is a large pond, koi ponds, gazebo, benches, boardwalk, walls, rocky waterways and grassy lawns.

The parks website says over 75 plants, but I rather liked this signage of map and plant list. I’m thinking it’s more. You’ll have to go there to read. Native and exotic plants were chosen for their ability to be drought tolerant.

Spring is a great time to visit with the blooms of plants and trees. Volunteers were busy gardening, but one stopped to talk to us telling us about other gardens to visit. (She’s the one who gave us more information on the Clark family. We had visited the Clark Bird Refuge the day before.) 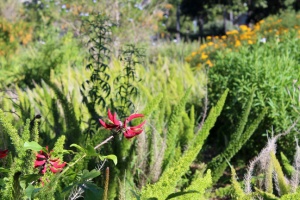 Across the street from this garden, is Alameda Park – a 2-block-sized park. With lawns, bandstand, playground and bathroom. I loved this palm sprouting ferns.

And some very large trees.

From here we walked to the Santa Barbara Art Museum on State Street. It’s a small museum, but it had exhibits of Botticelli to Titian and one of Degas to Chagall. We got to see some fine work we hadn’t seen before. We had made a day visit – but I forgot to take a picture – so here’s one from an evening stroll. Oh, we had a fantastic lunch in the museum cafe.

We first arrived in town late Sunday afternoon, tired and hungry. My mission was to go out and find cheap food. Santa Barbara shuns fast food, but I found State St and was amazed at the people walking around this beautiful shopping area. It started to rain – and still people where everywhere. I found Panera – so there’s some ‘not so fast’ food available.

We returned to this street several times to eat and look and visit the Museum of Contemporary Art in the Paseo Nuevo. Over the week we ate meals at the Savoy Cafe (both a takeout meal and then just dessert another night), the Tupelo Junction (Southern meets SoCal), Louie’s (a few block away from State but the best meal), and Eureka for beer and burgers.

Can I rant about downtowns for a moment? In Santa Rosa we are always debating courthouse square and how should the parking be, blah, blah, blah. In Santa Barbara there is almost a mile of a lively shopping and restaurants with some business along the sidestreets. There is car and bus traffic on the street and many bicycles, but no parking. Lots are one block away, with 90-minute free parking – enough time for shopping or a meal. The sidewalks are wide and with mid-block crossings. Plenty of people gathered in the Courthouse Gardens, two blocks away.  Oh, a Macy’s and CVS are just other buildings on the street – no super mall nearby – but residential areas and gardens. Aside from better weather – what makes this place so vibrant while many dread our downtown?

People just seemed to enjoy being on State Street. I could see that in a heavy downpour. What a wonderful place in the sunshine.

Words by Lynn Millar, pictures by Lynn and Mike Millar, available upon request.