We had walked this section of the Kortum Trail many times before we decided to start a blog. It just had to be one of the first walks we shared. This was published January 2010.

The trail has been improved – more boardwalks and a sturdier bridge. Starting at Shell Beach, one has the most parking space, access to the trail north and south and across Hwy 1 to Red Hill and Pomo Canyon.

While winter can put you in touch with raw nature, remember to visit in May when the wildflowers are at peak.

It was an eye-watering, nose-running, earmuff-wearing kind of day for a walk. But every day at the ocean is different. This was just a raw cold and windy one.

The Sonoma County coast is on a more human scale than say Big Sur. That coast wears on me with its relentless towering steep slopes to the ocean. This coast is approachable with some mountains to the sea, plateaus that fall off to the beach and places where one can step from the road to the beach.

We had dodged rain storms to squeeze in this walk. Turning south from Hwy 116 to Hwy 1, we crossed the Russian River. On the drive south, we saw the ridge of each ocean wave distinct and miles long.

To the ocean side of Hwy 1, at mile marker 18.22, is a sign for Shell Beach. (This is just south of Goat Rock. North of Bodega Bay.) There’s a large parking area here, 2 pit bathrooms, one trail north, one south and steps down to the beach. 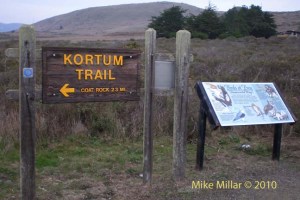 Heading north you can walk the farthest on the bluffs without the ups and downs of the coastal creek erosions. The first part of the path is hard packed dirt and rock.

The cliff to your left has occasional gaps due to erosion. These allow for the sound of crashing waves to reach you and a view of rocks, beach, sea and Bodega Head in the distance. Today only a few Indian Paintbrushes were blooming but in spring and summer the cliffs are coated with purple bush lupines.

After you pass through an old ranch post-and-wire fence you will see the first boardwalk. This has made the trail good for winter walks. The ground gets soggy from several swales (a fancy word for a depressed wet spot of land.) and the path had widened as people avoided the wettest places.

The non-boardwalk portions of the trail are dirt and grass. It’s fairly even, though there can be muddy spots if it has rained a lot just before your walk.

After the first boardwalk and more grass path you will see a post with an engraved yellow arrow. These are your guides that keep you away from dead-ends and paths that could come crashing down. (Well, that’s a little dramatic. But look at the coast. People are losing houses to the crumbling cliffs.)

Also look for the blue and white circle of the California Coastal Trail. Coastwalk has helped make this trail possible.

The ‘true’ path heads inland and then north again, where you’ll cross another boardwalk and bridge. On Saturday, there were some blackberry flowers and a couple of cow parsnips just starting to bloom.

After the bridge the grass path leads to the coast again. Before the path turns north another boardwalk starts with a zig-zag course. Due to the water collecting in the ground here the vegetation is dense with ferns, grasses and reeds. You can see the grasses beaten down, not just from errant humans, but from other animals, who cross here.

Other than flying birds, signs of wildlife include coyote scat and gopher-plowed earth. Occasionally you can see deer. The surrounding grasses provide the best cover, as there are few trees. Low-lying Coyote Bush and Bush Lupines provide habitat for birds and hide rabbits. 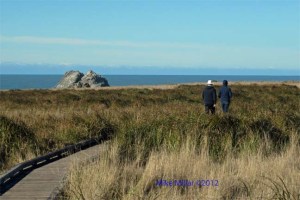 After about a mile you will come to the first possible walking challenge a dirt path with some steps down to a creek crossing. While you’re thinking about whether you can do that or not, walk toward the cliff to stop and look around. The view is great. You can look down on the ocean, get mesmerized by the waves, enjoy the crash of water on rock, or admire the mountains and cliffs to the north.

In the spring, this spot reveals an abundance of flowers. You’ll be standing on the aptly named Footsteps of Spring.

The sea stole the show this Saturday from a few scraggly Seaside Daisies. Another treat were four pelicans cruising just over the waves’ ups and downs. I’m always happy to see pelicans, since we had about annihilated them with DDT use not that long ago.

So about going down and across the creek… It’s about 20-30’ down a dirt path with some steps to a wooden bridge. If you can make this, great! Climb up the other side and you can walk another half mile before there is another crossing. The path passes a large rock outcrop and climbs up to Goat Rock Road.

But you can turn around and stay on the flat retracing your steps.

Enjoy a walk at the ocean on any day. It’s always different. 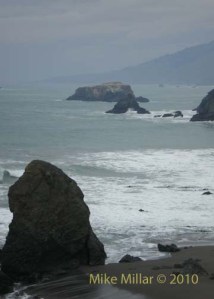 Labyrinth: From the Shell Beach parking lot, between the first fence and the first boardwalk is a labyrinth about 100’ inland. This was started about 10 years ago and has gradually grown over time as people add to it. A narrow dirt path weaves between rocks people have brought to the spot and grasses. At the center many more people have left a token, as can you. Remember to look up as you face the ocean.

The thing about labyrinths like this walk is you keep you head down and pay attention to the little things right in front of you and at the end of it—or from time to time you look up and see a live kite (bird) kiting (wings flapping to hold a position) over the meadow or pelicans cruising the waves. 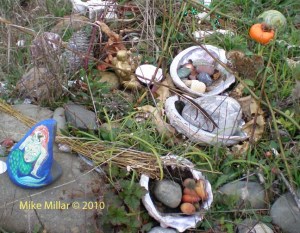 ShellBeach: Is many steps down. I think it has been rebuilt in recent years. Though I haven’t been down these steps in a much longer time. After winter storms the bottom steps of most stairways at the coast are taken out by the waves. This is a popular and beautiful beach. But I find the access at Furlong Gulch easier. (South of Shell Beach at Carlevaro Way, keep right to Grill Way.)

Kortum Trail: Named for Bill Kortum, a former County Supervisor. He helped organize the California Coastal Alliance and was its chairman. The Alliance made up of ten organizations, helped protect the coast so we all have some kind of access. From Blind Beach to Wright’s Beach the Kortum Trail is 7.5 mi.

Why it’s so popular: The Kortum Trail goes north and south. You can go down to the beach. Across the road is the trail to Red Hill (where the banner picture is taken from) and to Willow Creek and Pomo Canyon. (Due to budget cuts campgrounds are closed through June 2011. 2014: perhaps open, seasonal, check park website)

Wheelchairs: The first part of the trail north and the first boardwalk should be okay. After that it might be a bit rough. The bathrooms are enormous and accessible.

Bathrooms: A sturdy structure with two roomy pit toilets, lockable doors, coat hooks, but no water. There’s a fantastic view at the end of the parking lot by the steps down to the beach.

Restrictions: No dogs, no horses, no bikes. (State signs have a dog symbol that looks like a horse, but it means no dogs.) Probably no spitting or foul language either. (Oh, those are my rules. But good ones.) Service dogs okay.

Food: Head north to Jenner where there are a couple of restaurants and the Café Aquatica that has some sibling relationship to Gold Coast and therefore has the beloved Café Cubano. Head south to Bodega Bay for more restaurant choices and salt water taffy. 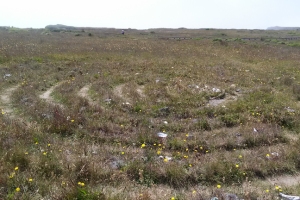 Other nearby walks: Above Wright’s Beach is another section of Kortum Trail. If you can handle a hill, try Red Hill.