A couple of words come to mind about walking to Kehoe Beach in Pt Reyes. One is yellow. 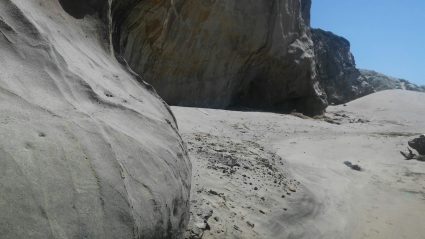 While mustard dominates the flowers on the trail to Kehoe Beach, there are plenty of other flowers around. And the mix of flowers will change as the season changes.

From Pierce Ranch Rd, (north of Abbott’s Lagoon) the trail runs along a creek on its way to the ocean. Near the trailhead were twinberry, dogwood, salmonberry and native blackberries. Since it was wet, coastal iris were lurking.

On the trail suncups, blue-eyed grass, pimpernel and poppies showed off.

As well as, wild radish making a show in the mustard.

It’s only about .6 mile to the beach and relatively flat, though we had to take the high ground around this wet spot on the trail. (Without recent rain, this will probably dry. Or wear rubber boots.)

Closer to the beach the yellow changes from mustard to darker yellow poppies, uphill.

Still behind the cliffs and dunes near the ocean, we had a view of the ocean as the creek opened wider. 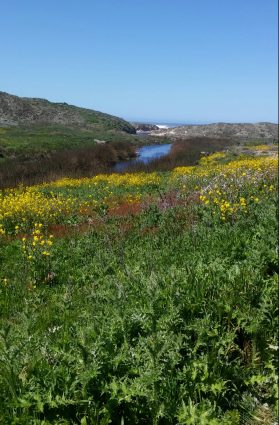 Of course, at the beach the plants change more. Somehow we didn’t get pictures of them other than the grass. Add purple verbena. Add something similar with bright yellow clusters. Add yellow lupine.

Now a short aside. From March 1 to September 30, this is a nesting area for snowy plover. Leashed dogs are allowed on the trail and restricted on the beach to the north. Still a good idea to stay away from the dunes and move down to the harder sand. Well it’s easier to walk on wet sand. Just watch the waves. Check you tide tables to arrive at low tide. 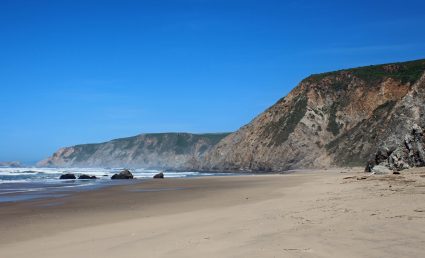 This is where the geology kicks in. Cliffs of sandstone rise above the beach. Laird Sandstone. It shows in layers and smoothed rock (as in the second picture above.) 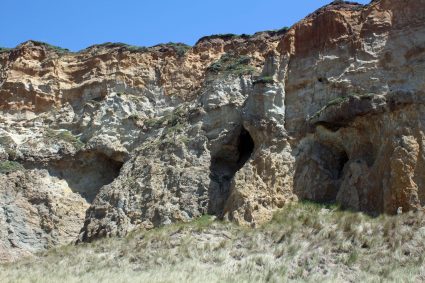 In less than a half mile walk north, the sandstone lies on (or is mixed up with) a granitic rock. Granitic? Like granite? Yes. 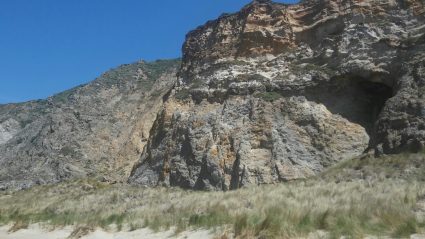 The rock was formed in the southern Sierra Nevada 85 million years ago. It arrived here along the San Andreas Fault, moving north (350 miles) with the Pacific plate. There’s your short version. I bet there’s a class on this. I’ll just gaped at it in wonder.

Words by Lynn Millar, pictures by Lynn and Mike Millar, available upon request.